Plant a tree in memory of Trevor
An environmentally-friendly option 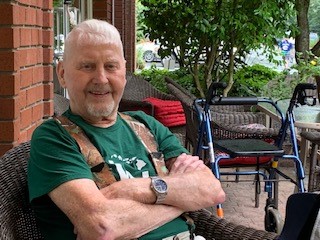 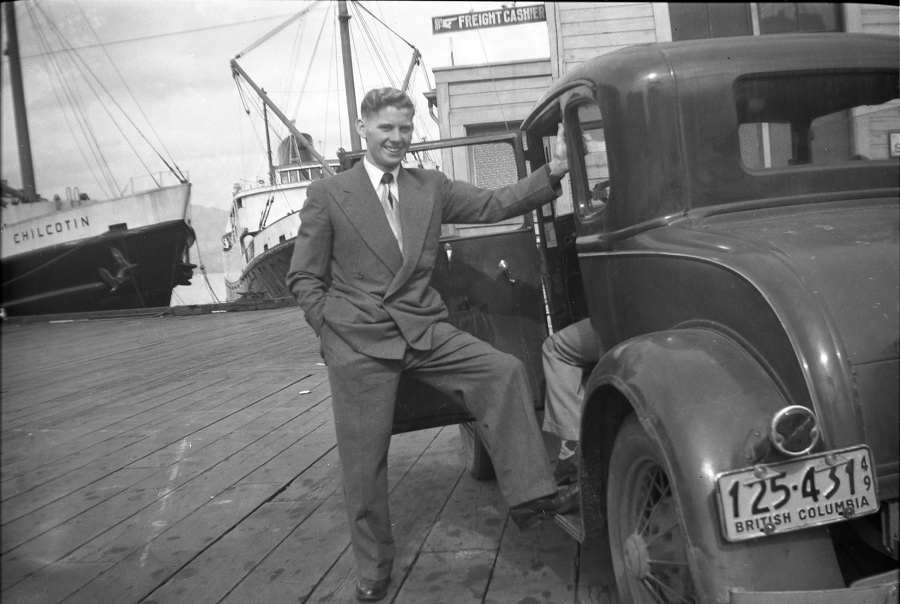 It is with great sadness we announce the passing of our Dad, Papa and Great-Papa on May 24, 2021 in Chemainus, BC.

Trevor lived a full and varied life. He was born in Cheltenham, England on June 5, 1929 – the seventh and youngest child of Frederick G. W. and Frances Jelfs. His education was interrupted by the Second World War as he had to perform needed activities from gathering scrap to harvesting vegetables. In his teens, schooling officially ended entirely and Dad went to work as a “gofer” in a machine factory. He did a variety tasks, including some work on gliders being built for the D-Day Landing. It was here that the seeds of his career as an electrician were sown. He also learned to drive here and driving became one of his favourite pastimes.

After the war, Dad persuaded his parents to allow him to join the Merchant Marine, following in the footsteps of his brother Reuben Samuel (“Uncle Bunko” to Dad’s kids). After completing the Merchant Marine training, he went to sea – his first trip being on a molasses tanker serving Cuba. His years on the sea took him from Britain to Churchill, Manitoba, to Lagos, to Montevideo, to Montreal, to Hamburg, to Sweden and eventually to New Westminster and Port Alberni in B.C. In Port Alberni, Dad had another life-changing event – the ship departed without him. Making his way back to Vancouver, Dad, a lover of dancing, attended Seamen’s dances where he met those who sponsored him in Canada.

After settling in Vancouver, Dad joined B.C.’s iconic Union Steamships and worked on the S.S. Catala serving the Coast for a few years.

In 1950, Dad met Fay Cairns of Cloverdale, B.C. at Vancouver’s Embassy Ballroom.  They fell in love and were married in August 1951. Mom and Dad settled in Vancouver, where Dad continued his electrician’s training. They had three children – Rick, Arlene and Karen – before moving to Penticton, B.C.

This was the first of a number of family moves as Dad went where there was work. After living in Penticton, Kimberly, Penticton (again) and a brief stint in Prince George, the family permanently settled in the Valleyview suburb of Kamloops. A fourth child – Allan – was born there.

Dad was not a sit on the couch type and life was very busy.

Camping, boating and fishing were favoured summertime activities and we have wonderful memories of boating to isolated shores for a day picnic. Many weekends were spent camping at Shuswap Lake where Dad, with infinite patience, taught us to water ski. There were also great family vacations to Vancouver Island, the Oregon Coast and Expos 1962 (Seattle) and 1967 (Montreal). Hunting, skating and tobogganing were popular in the winter.

Dad was active in his kids’ lives. He volunteered with the Wolf Cubs and Boy Scouts and was always willing to drive us to whatever activity we were participating in. He also found time to take up curling.

He supported the local community by becoming a volunteer fire fighter in Valleyview.

Dad was a dedicated union supporter and a 50+ year member of the International Brotherhood of Electrical Workers.

Dad left Kamloops to work in the U.S. in the late 1970’s. At a Legion dance, he met Eleanor, who became his second wife. They lived in Green River, Wyoming. Dad became the step-father to Eleanor’s six children -Todd (Rosalie), Paula (Ed), Pam (Clifford), Rob (Kristy), Tanya (Greg) and Dana, who survive him - and step-grandfather to their children and grand-children.

Dad and Eleanor travelled extensively and returned to western Canada every year. They had a fondness for Vancouver Island. They also visited New Zealand to see Dad’s brother, Nano and a number of cruises were taken. Both enjoyed fishing, and they regularly fished the Flaming Gorge Reservoir in Wyoming.

After Eleanor died in 2019, Dad returned to Canada and settled in Ladysmith, B.C., living at LaRosa Gardens. Always garrulous and friendly, Dad quickly made new friends and participated in the facility’s activities. Unfortunately, the COVID-19 pandemic crimped Dad’s social life and for most of 2020 and 2021, he was under the lockdown. Fortunately, he kept active doing paint-by-numbers, a craft taken up in construction camps many years ago. He was also an avid reader.

Eventually, Dad needed to move and he went into hospice care. The Chemainus Health Care Centre – Hospice Care took him in and provided wonderful care to him and his family. The facilities there allowed him mobility and we were able to wheel him around Chemainus and down to the water. The sea always had a special draw to Dad and the family is grateful that he was able get some last glimpses of the water and feel the fresh, sea breeze.

There were several constants that defined Dad’s life. He was dedicated to family and friends; he believed in hard work and upholding your responsibilities to those you love and who depend on you; and if a job was worth doing, it was worth doing right. He was generous with his time and skills.

He had a number of simple pleasures, which he enjoyed until he was no longer able to.

Dancing was a great pastime for Dad and was connected to the major turning points in his life – settling in Canada, meeting his first wife and the mother of his children and meeting his second wife. Seamen’s Halls, night clubs, weddings, union parties, cruise ships, New Year’s Eve bashes, …, if there was a dance floor, Dad was the first one on and the last one off.

He was brutal crib player and, in most cases, took no prisoners – his daughters being the exception. It was a game he loved.

And driving; Dad learned to drive in his teens at the machine factory and it gave him pleasure ever since. A good day was a country drive followed by a stop at a Dairy Queen.

So long, Dad. We miss you and love you. Thanks for everything.

Special thanks and appreciation to Dr. Swamy, the staff at La Rosa Gardens, La Rosa Home Support Nurses and Care Aides and, for his final journey, the caring staff at Chemainus Health Care Centre – Hospice Care.

If you so choose, a donation, in Trevor’s memory, to the Alzheimer Society of British Columbia, Cowichan Valley Hospice Society or a charity of your choice, would be greatly appreciated.

Plant a tree in memory of Trevor by clicking here.
To send flowers to Trevor's family, please visit our floral store.

Plant a tree in memory of Trevor
An environmentally-friendly option

Plant a tree in memory of Trevor

1 tree planted in memory of Trevor

A Memorial Tree was planted for Trevor Douglas JELFS

Plant a tree in memory of Trevor